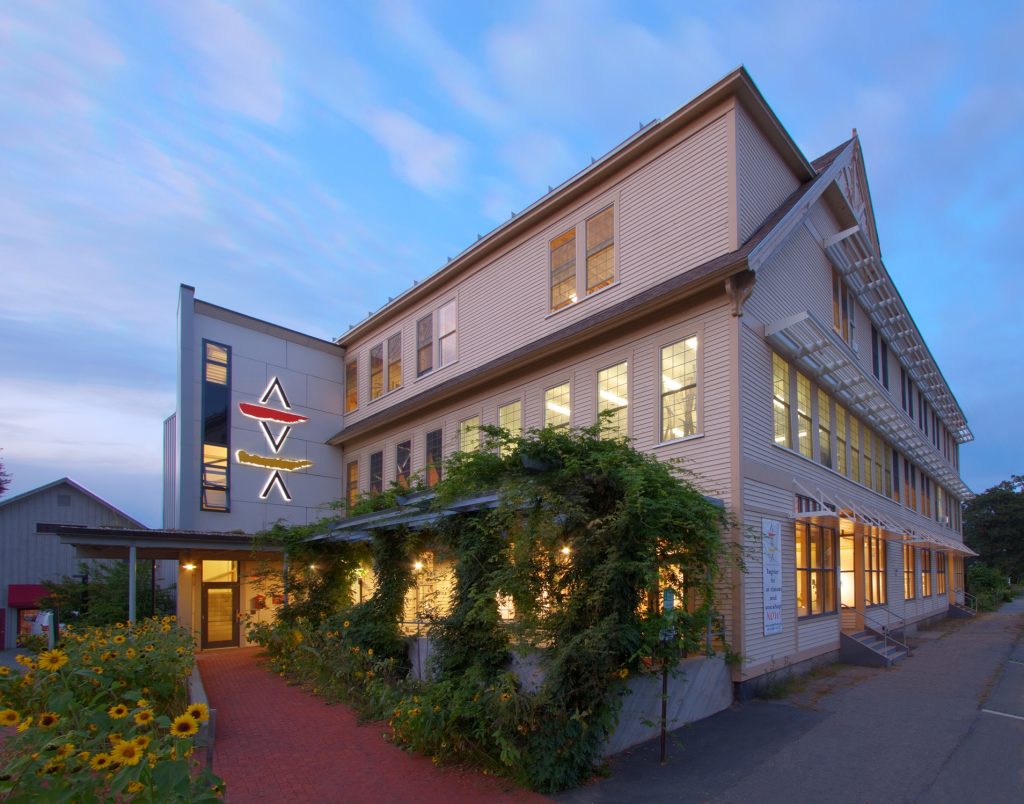 From Overall Factory to a “Green” Art Center:

How AVA Gallery and Art Center’s 2006-2007 renovation of a 140-year-old building in downtown Lebanon, New Hampshire, has resulted in a transformation on many levels.

In 1990, AVA (Alliance for the Visual Arts) became a tenant in the former H.W. Carter overall Factory building at 11 Bank Street in Lebanon, New Hampshire, along with a number of artists who rented studios there. Previously, AVA had been located in Hanover, New Hampshire. This move proved to be an organizational milestone as it enabled AVA to reach out to communities, like Lebanon, that previously had been underserved by arts organizations and, eventually to transform the building into a “green” art center that has contributed considerably to the revitalization of Lebanon and the surrounding communities.

In September 2003, AVA acquired this former factory building. With its ample spaces, high ceilings, and abundant natural light, the building was uniquely suited to accommodate AVA’s vibrant art offerings. Yet at the same time, the old post and beam structure needed significant work to be code compliant, energy efficient, structurally sound, and to better meet AVA’s and the community’s future needs. In 2004, AVA contracted with Banwell Architects and Trumbull-Nelson Construction Company to develop plans for a much-needed renovation of this Lebanon landmark. The $4.5-million renovation—paid for thanks to individual gifts (88%), foundation grants (7%), and corporate support (5%)—began in September 2006 and was completed in October 2007.

The LEED process is a so-called “integrated process,” during which all the involved parties – in this case Banwell Architects, Trumbull-Nelson Construction, all the engineers, consultants and other construction and design professionals, along with AVA’s board, staff and building committee – worked closely together from the earliest planning stages of the renovation, to make this project a “green” and sustainable one. The LEED certification criteria are determined by levels of achievements within a series of categories established by the USGBC. These categories are: Sustainable Sites, Water Efficiency, Energy Performance and Atmosphere, Materials and Resources, Indoor Environmental Quality, and Innovation and Design.

Some of the various measures that were taken to transform Eleven Bank Street into a high-performing a, energy-efficient facility included an airtight building “envelope,” thanks to the foam spray insulation between the exterior and interior walls, and the replacement of the 141 ill-fitting windows that were a legacy from the days of the overall factory. In addition, 95% of all construction waste removed in the course of the renovation was recycled (in other words, only 5% went to the landfill). The building is kept at a comfortable temperature during the winter, heated by three small liquid propane tanks that replaced an enormous, unreliable boiler. The building, with its profusion of natural light, is not air conditioned. Proper ventilation and cooling/heating are provided by a LEED-approved air-exchange system, by windows opened for cross-ventilation in warmer weather, and by sunshades (also LEED approved) on all three stories of the building’s southern façade. The air-exchange is an energy-recovery ventilation system that monitors the indoor air quality. The sunshades on the top two floors are fixed aluminum louvers, which allow the sun in during the winter and deflect it from the windows in the summer, all the while allowing ambient light into the studio spaces. The green roofs above the entrance canopies are beautiful to look at. They also have a cooling effect, and provide habitat for wildlife. These and other initiatives that resulted in LEED Gold certification are further described in our “AVA LEED” app.

A number of the initiatives that were taken to make this a “green” renovation project quickly resulted in an impressive reduction in energy consumption and savings; according to the models established by LEED for comparisons of actual energy savings, the AVA building boasts an impressive 71.5% in energy savings compared to that of an average new commercial building. (The project’s mechanical engineer, Bill Root of GWR Engineering, proudly compared the energy- efficient AVA building to “a Prius on steroids!” According to C. Stuart White, Jr., the lead architect for the project, “the renovation has transformed the building from being an energy hog to an energy miser.”)

Ultimately, though, one of the renovation’s main achievements was the recycling of an entire building and the successful combination of historic features with new and contemporary approaches to construction, architectural design and environmental sustainability. These accomplishments have received recognition beyond the LEED certification. The renovation has since won several additional awards, including a “Plan-NH Merit Award,” given to exemplary projects that incorporate the principles of “smart growth, sustainability, and social responsibility”; a “Citation Award” from the American Institute of Architects, VT Chapter, given to Banwell Architects for Excellence in Design in the Historic Preservation/Restoration category; and an “Award for Excellence in Construction” from NH and VT Chapters of Associated Builders and Contractors, which was given to Trumbull-Nelson Construction.

In fall 2010, AVA was one of six organizations nationwide to receive an ”Innovative Space Award” from LINC (Leveraging Investments in Creativity) and the MetLife Foundation. This highly competitive national award recognizes outstanding efforts in the design and development of affordable spaces for artists and is given to organizations that “provide a firm base from which artists may pursue their work while simultaneously contributing to shaping vibrant, healthy communities.”

The process of renovating AVA’s 140-year-old building in downtown Lebanon has resulted in a transformation on many levels: An important piece of the fabric of the historic northern New England village has been preserved; a previously inaccessible building is now welcoming to people of all abilities; a building riddled with safety violations and structural deficiencies has been thoroughly upgraded to comply with 21st-century international building codes,

The renovation also demonstrates the enormous potential for energy savings in the built environment. In the parlance of the day, AVA is an example of a “deep energy retrofit”. Monitoring will continue to insure future performance, and new initiatives are underway, including the installation of a PV solar electric array on AVA’s roof. We continue to pursue initiatives that can further help reduce the carbon footprint of our building and have as a goal to become net zero by 2017.

The cost of the renovation was $100 per square foot, roughly half of what it would have cost to tear down and build new. The historic ambiance of the old building is irreplaceable. Studies were undertaken by consultants to determine the costs of energy efficiency measures, primarily involving the building envelope—windows, exterior walls and roof—to compare with the cost of the business-as-usual design approach. In the end, the numbers showed that the expense of upgrading the building envelope resulted in greatly reduced heating system costs to the extent that they cancel each other out; there is no additional cost to be “green” in this case, which is counter to commonly held perceptions.

The fluctuations in energy prices since 2007 have made it difficult to obtain exact figures on the building’s energy savings. The most stable and meaningful comparisons pre-renovation/post-renovation relate to the actual energy consumption; thus, it has become clear that the low post-renovation energy use has led to considerable operating cost savings for the building. These energy savings have, in turn, enabled AVA to keep the rent on the artists’ studios at affordable levels. In essence, the measures that were taken to lower the building’s energy consumption are measures that now help support the arts.

Just as AVA’s art programs challenge, educate and inspire the public, so does our “green,” LEED Gold-certified building renovation. It resonates and is consistent with AVA’s mission and programs and provides an inspiring, inclusive, creative and educational backdrop for programming that truly demonstrates “the ways in which art enriches our lives.” The abundant natural light that permeates the building—along with the open spaces, high ceilings, and creaky, uneven wooden floors (all a legacy from the past)—are among the many features that make visitors feel an immediate sense of well-being. The building is simple, unpretentious, yet elegant, warm, and welcoming. The building is now named the Carter-Kelsey Building in recognition of its past as the H.W. Carter & Sons overall factory and in honor of the main benefactors who helped make the renovation possible: Virginia and Preston Kelsey.