As we begin a new year at AVA, we would like to remember some of the people we lost in 2018:

Greg Banks, with his wife Betsy, were ardent collectors of AVA artists and loyal AVA supporters whose support continued long after they left the Upper Valley for New York city and later Washington, DC. Among their many contributions to AVA was one that helped make possible the installation of LED lighting in the galleries after the 2008 renovation of AVA’s Carter-Kelsey Building.

Alisha Boice was active in the Special Olympics, a volunteer at Listen Community Services, and a proud member of AVA’s Art Lab community. Just before her untimely death, she participated in the Art Lab “Delicious Art” exhibition in AVA’s main lobby.

Donna Butler was a professional musician who expanded her creative life by taking visual art classes at AVA. Her obituary noted her watercolor paintings and all the friends she had made at AVA. She and her husband George were among the first to contribute to the capital campaign for the new sculptural studies building.

Kim Christiansen told a story at the March 2018 Mudroom about the first time he almost drowned while surfing after a 40-year hiatus. He was a professional artist who has a piece in the collection of the Smithsonian Museum. Kim was always the first person to show up for a Mudroom performance, and when he missed June’s Mudroom, we knew something was amiss.

Libby Gardener was a native Vermonter who opened her own ceramic studio in Hanover in the 1940’s and was instrumental in the early years of both AVA Gallery and Two Rivers Printmaking Studio in White River Junction. She served on AVA’s board of directors, including as Treasurer, for many years. She remained a working artist well into her eighties. 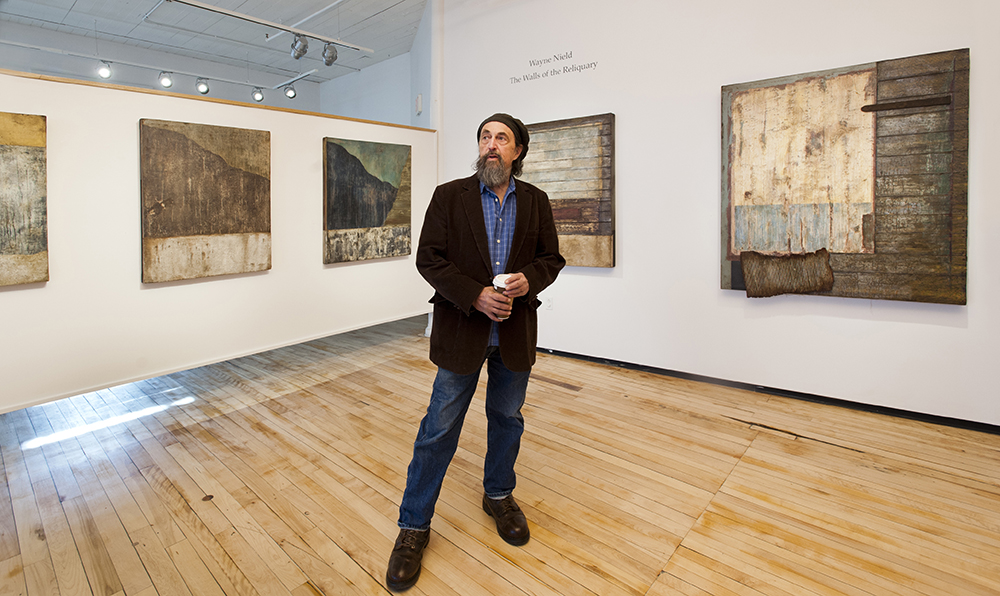 Wayne Nield moved from Baltimore to Canaan, NH in 2011, in order to be closer to AVA and was an active AVA member artist. In 2014, AVA exhibited his remarkable paintings in a show named, “Walls of the Reliquary.” Wayne was a fixture at exhibition openings and events in the seven years he was with us, and his presence is much missed.

Brenda Phillips was involved with AVA over many years, serving on the board of directors in the 1980’s and as a volunteer in the galleries until her illness forced her to retire. She was an accomplished artist who regularly showed her work at AVA, most recently this past February when she exhibited the large-scale work in her goddess series. In October of 2017, family and friends put together a touching and impressive retrospective of her work in her barn studio in Plainfield, NH, from which this work was selected.

Sybil Williamson was such a force of nature that it’s hard to imagine her stilled. She was a favorite docent at the Hood Museum of Art, a juried printmaker in the League of New Hampshire Craftsmen, an avid art collector with her husband Peter, and a board member at AVA. In that capacity she was responsible for the strengthening of AVA’s membership program and other key elements of the organization.

Brian Walsh was known throughout the Upper Valley for his service to the community in a number of different ways, including his long tenures on the Hanover Planning Board and Selectboard. He was also an accomplished watercolor painter and supporter of AVA. He served on the committee that developed AVA’s popular “Greg Hemberger Sustainable Architecture Workshop for Teens” in memory of the architect Greg Hemberger.