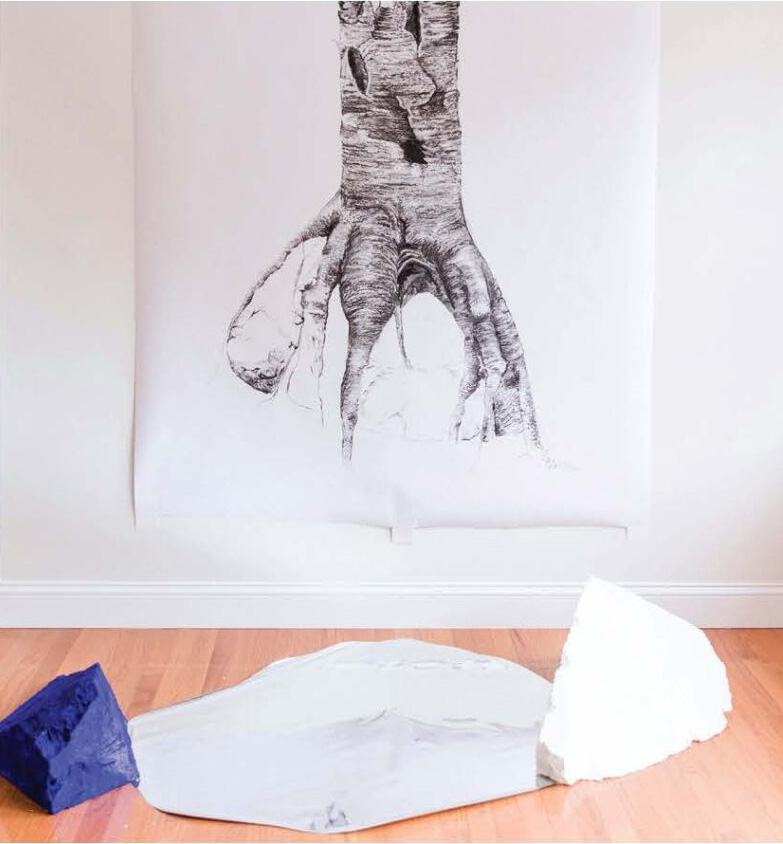 Nick Lamia has a bachelor’s in environmental science from UC Berkley and an MFA from Boston University. He is the recipient of a Guggenheim fellowship and has attended residencies at Wave Hill, The MacDowell Colony, the Robert Blackburn Print Workshop, and the Triangle Artists Association. 500 of his small-scale drawings were included in the inaugural Bronx Museum Biennial in 2011. Recent solo exhibitions include Cloud Architecture at Planthouse Gallery in New York and Greenhouse, for which he created a group of site-specific wall works for the Richard Meier building at Grand Army Plaza in Brooklyn.

Elizabeth Nelson was born in New York City and began painting when she was eight. She graduated from Rhode Island School of Design and then lived in Guatemala for a year, upon returning earned her master’s degree at the University of North Carolina at Chapel Hill. She has been a teacher, dairy farmer, museum curator, and always a painter. She has exhibited throughout Vermont and New England as well as in juried shows in Reykjavik, Wisconsin, New York, Kentucky, and Pennsylvania. She was a resident at the Vermont Artist Week at The Vermont Studio Center in Johnson VT, and a two-time artist in residence at the SÍM (Association of Icelandic Artists) in Reykjavik, Iceland.  She has lived in northern Vermont for over fifty years where she raised her children.

Born in Kyiv, Ukraine, Katya Roberts grew up in California and has a BS in Sociology with Art Emphasis from UCLA. In 2002 she received the UCLA Women in Art Award. After working at Fox Studios, she taught and developed the visual arts curriculum at Pacifica, a college preparatory school in Santa Monica, CA. In 2015, Roberts exhibited a series of three installations for KCRW’s Chinatown summer nights in Los Angeles, CA. In 2016, she moved to Rochester, Minnesota and founded the Mayo Art Group. In 2017, she had a winning sculpture proposal for the public art series Art4Trails, Unbroken, an aluminum sculpture now on permanent installation at Mayo Park. She was a recipient of the Southeastern Minnesota Arts Council grant for a solo exhibition titled Traverse at the Rochester Art Center. In 2020 Roberts exhibited This Side of the Sun in the Turret Gallery at the historic Castle building in downtown Rochester, MN. Roberts has lived in New Hampshire since 2020.