Summer Starts with a Celebration—and A Lot of Thanks

The longest day of the year could have gone on forever, as far as we’re concerned.

A golden light and pleasant temps presided over AVA’s second annual Summer Solstice Party on June 21, as more than 150 community members joined us to celebrate several achievements and milestones over the past year, including the first anniversary of the Bente Torjusen West Sculptural Studies Building (affectionately the “Bente Building”) and the generous donors who made it possible.

With food and drink provided by Three Tomatoes Trattoria and Salt hill Pub in Lebanon, partygoers freely explored the Bente Building, moving among works-in-progress in the Kelsey Stone Carving Studio, getting up close to state-of-the-art equipment and live metalworking demos in the welding studio, and mingling on the adjacent open-air Terrace Studio. 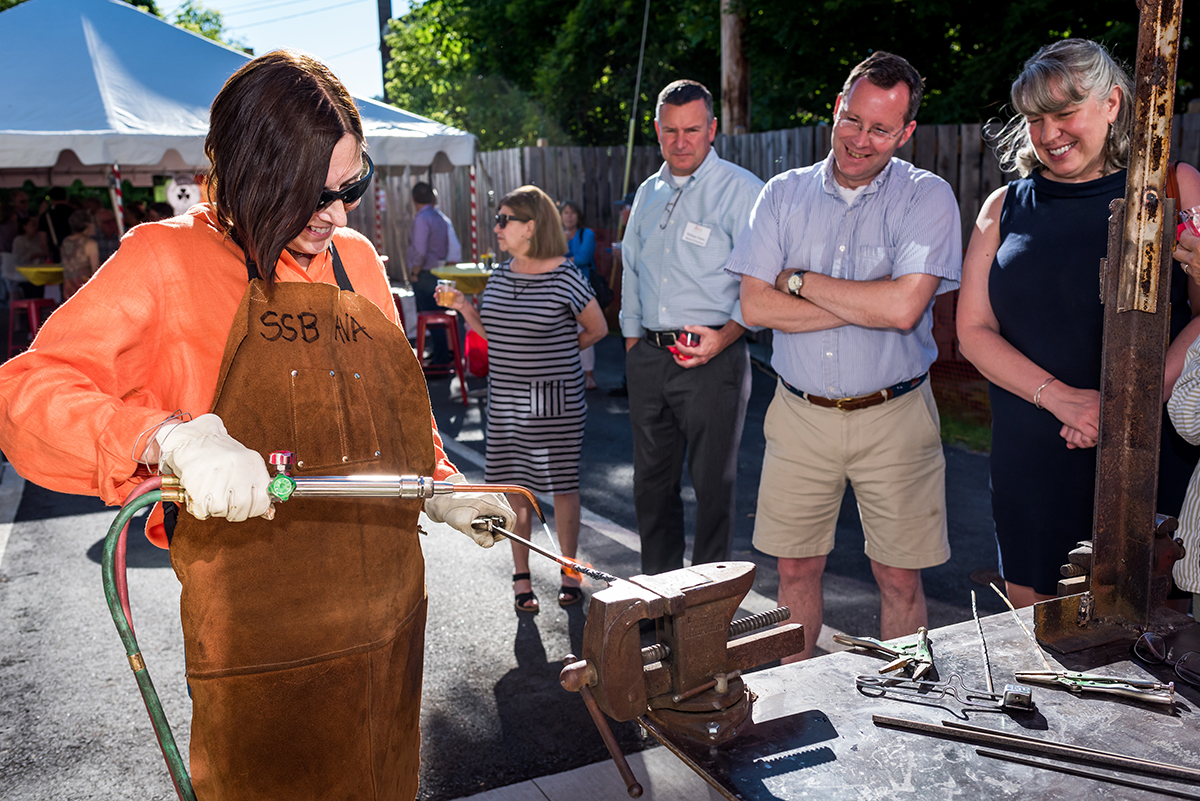 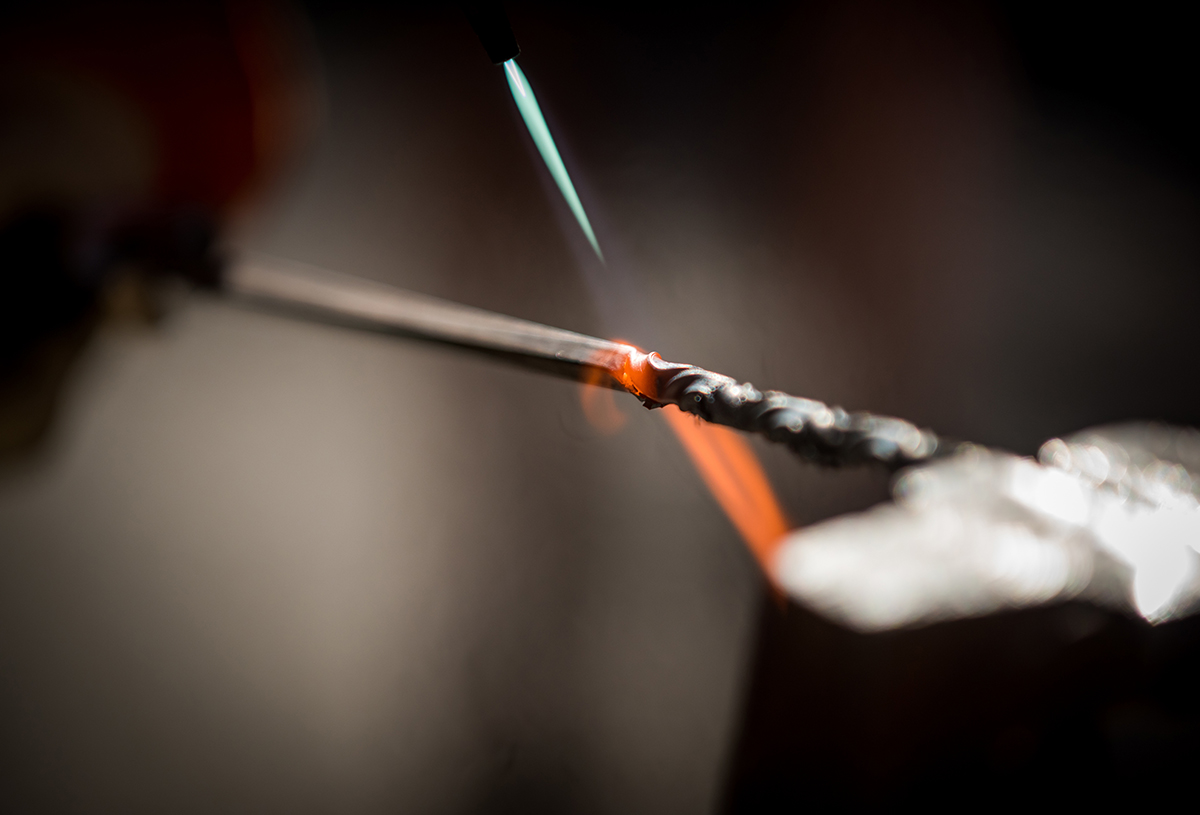 Since its opening in Fall 2017, the Bente Building has welcomed 85 students into its new sculptural studies program, and 12 new sculpture instructors have joined AVA’s faculty.

Outside the building, before gathered onlookers struck in awe, ceramic artist David Ernster demonstrated a pottery-making technique called raku, which involves a rapid heating and cooling process that gives the pottery unique and unexpected colors and surface patterning. 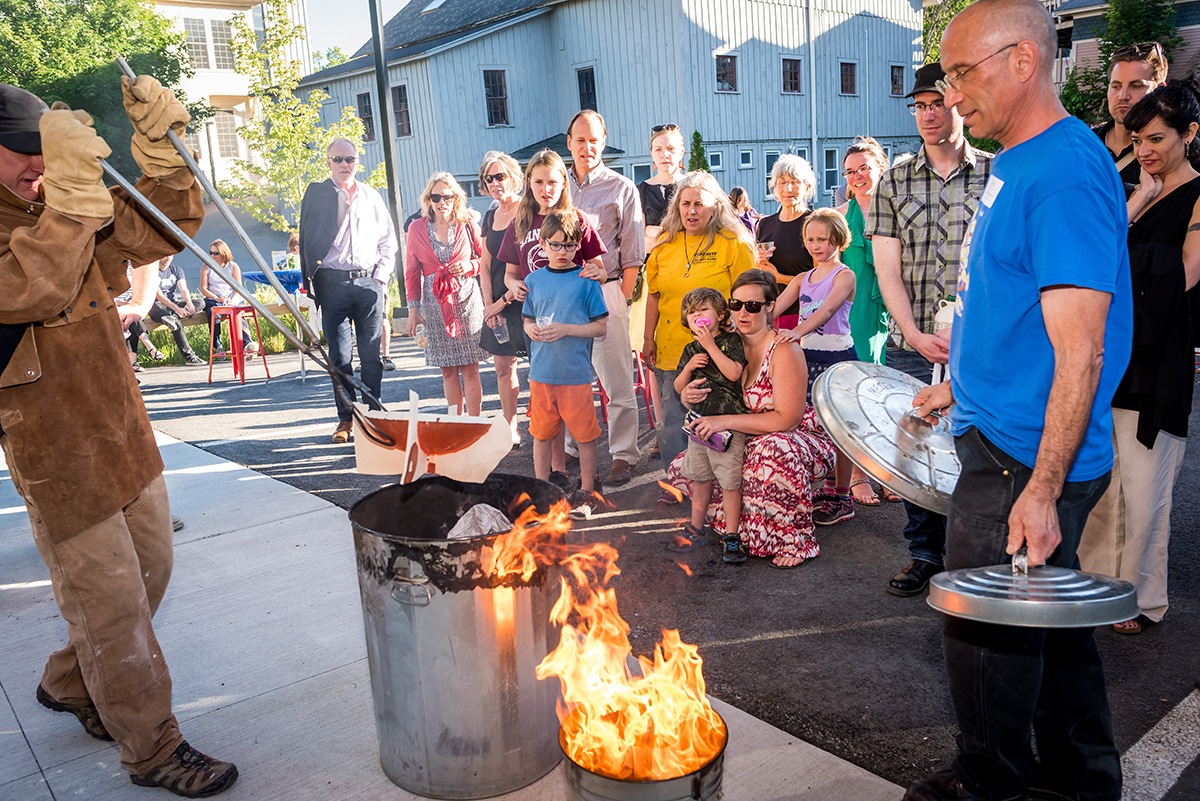 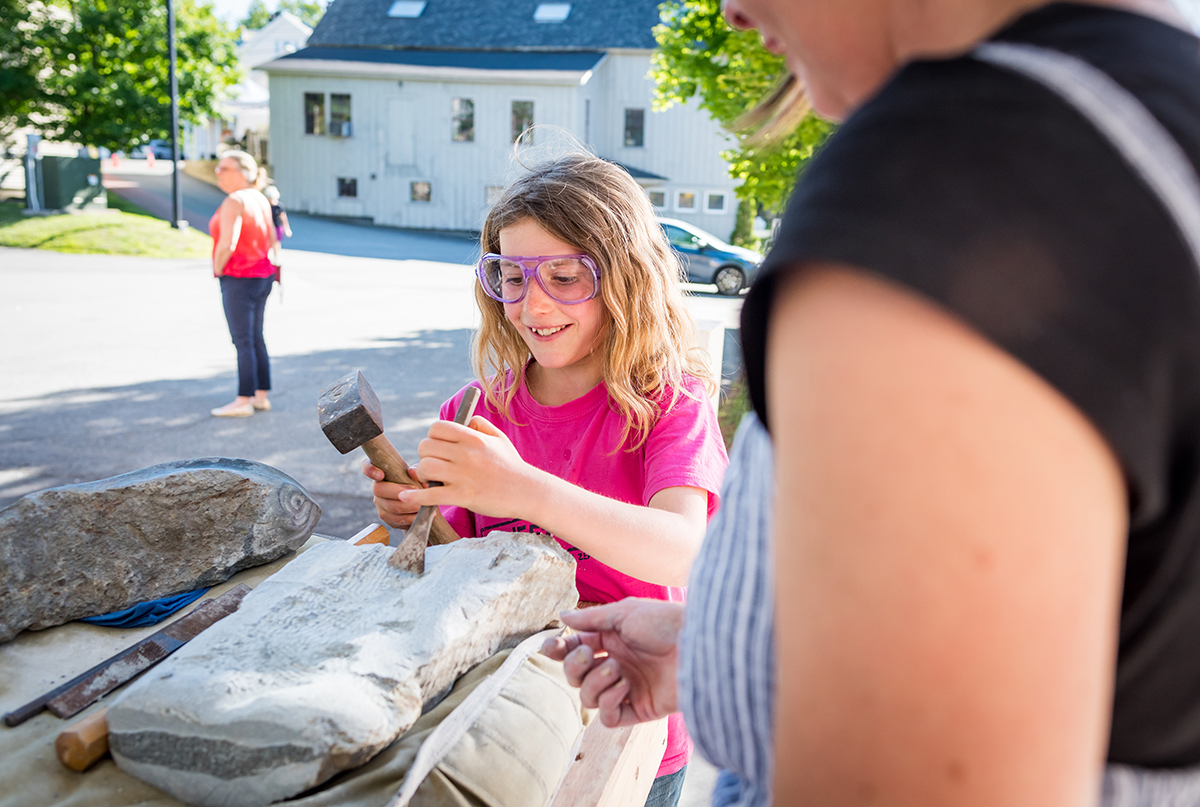 Andrew Garthwaite, Chair of AVA’s Board of Directors, took to the microphone to honor and acknowledge the many donors, members, staff, volunteers, bequests and benefactors—“so many moving parts”—that came together to make the Bente Building a reality. The process from start to finish to this one-year anniversary, he said, “embodies AVA’s mission of ‘Branching Out, Deepening Roots’ in the community.”

Board Secretary Jill Mortali highlighted three significant legacy bequests—from the Middleton family, the Hollister Art Trust, and the Leede family—totaling more than $400,000 and going to support capital and operating needs as well as scholarship funding.

Capping off the many causes for applause, AVA Executive Director Trip Anderson publicly thanked the area individuals and organizations who donated equipment and their expertise to the new building. Special acknowledgment was made to the Osgood-Hilles Charitable Trust for donating the Terrace Studio, Bill and Betsy Peabody for the building’s solar panels, and to William Dunn for the lobby where anyone can “Enter and Create.”

A painting by Bill Peabody—an encaustic painting of a sailboat, titled “June”—was presented to the Bente Building’s architect, Stu White, whose other love is sailing. 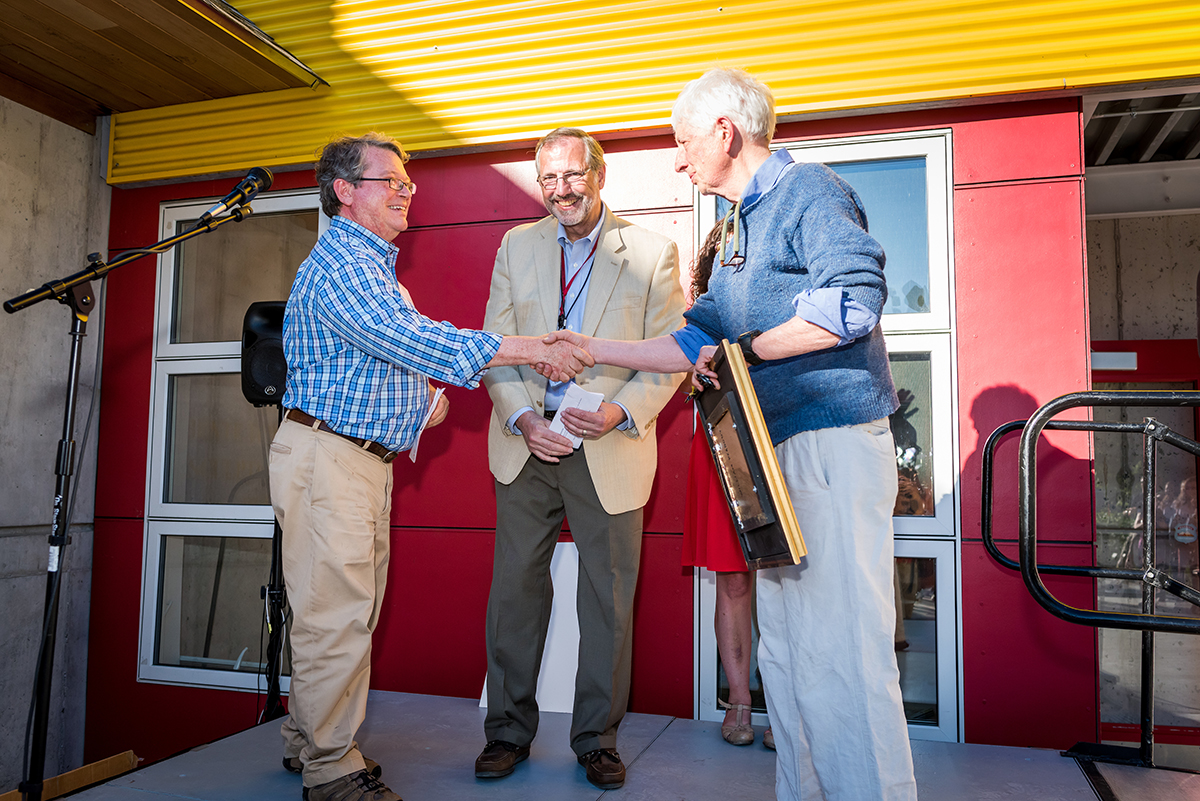 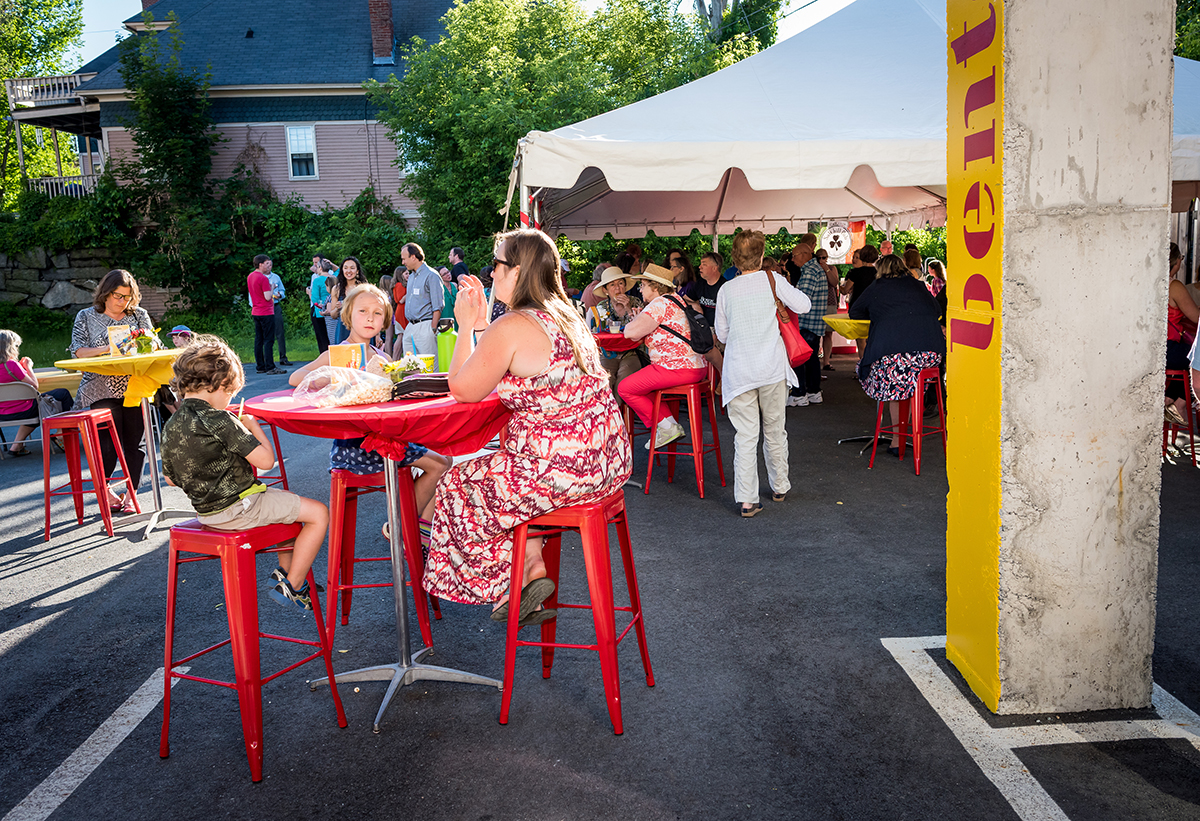 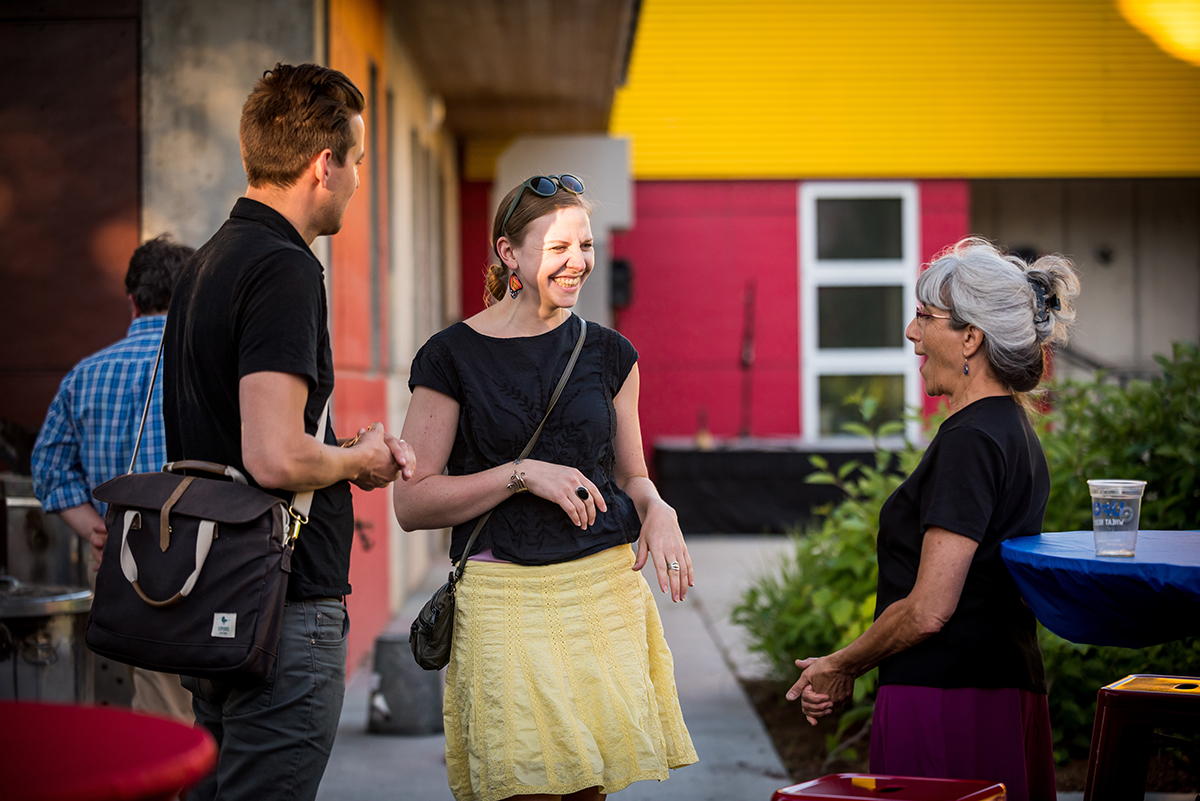 Before the evening, too, sailed on along a light breeze and conversation, Anderson summed up the occasion with an important call to action: “Help us celebrate AVA’s vital role in our community. Help make Lebanon and the Upper Valley an arts anchor. Help make art part of our everyday life!”

In a class on the art of the tropical rainforest, it makes sense to want to work with a lush, aqueous medium like tempera. What you may not expect a group of fifth-graders to grapple with are notions of perspective and realism in a painting—or the lack thereof.

Drawing on her own experience as an educator and her love of art history, Shimko developed Art Detectives to forge stronger connections between the grade-school curriculum and ideas in art. She schedules special visits to Upper Valley elementary classrooms and discusses with each teacher beforehand what subjects the students are learning. “Then we decide on a subject that lends itself to doing something enriching with art,” she says, “and I look for an artist and a piece of their work to integrate into their learning.”

Those fifth-graders were studying the environment when Shimko arrived one day with a print of Henri Rousseau’s “The Equatorial Jungle.” A lively discussion of rainforests and their importance led to observations about Rousseau’s painting and how it was made. “The class was very interested to learn that Rousseau had never actually been to a rainforest,” she says, “but had drawn his tropical plants from sketches made at the Paris botanical gardens!”

And they learned that Rousseau had such high regard for his raw, natural talent that he never took art lessons—which shows in his paintings’ overall lack of perspective and sophistication. Then out came the tempera paints, and Shimko asked the students to create their own rainforest paintings, following Rousseau’s style.

In another class studying the 1960s Civil Rights movement, Shimko introduced a piece by painter Jacob Lawrence, known for his vivid depictions of African American life.
For another she came with Picasso’s rooster, while the students had been hatching chickens in the classroom. “To be able to connect Picasso with actual chickens makes Picasso that much more engaging.”
Shimko is just as amazed by what the children say about these works of art. “You don’t expect a first-grader to look at a painting and say, ‘This shading makes me feel sad, and I think the artist was feeling like he wanted to show sadness.’”

Adds Shimko, “I tell them that there aren’t right or wrong ways to talk about art. It’s all about their exposure and experience of it, and I hope they begin to look at museums and AVA as places they aren’t afraid to visit.”

On Friday, June 1st, they’ll get their chance to visit AVA—and to find their own art on display. Culminating Shimko’s work with 19 classrooms in five different Upper Valley schools over the past year, the Art Detectives Art Show will feature an astonishing 298 pieces of student art. Visitors can explore the work exhibited throughout the hallways of AVA Gallery.

“It’s amazing that this program has had this level of success,” says Shimko, reflecting on the past year of Art Detectives. “And I’m excited to see how much further it can blossom.”

The Opening Reception is Friday, June 1, 4-6pm. The show is on view until June 9. Ripe! and Secrets of the Green World AVA is delighted to share that space is still available in two very special summer art camps: Ripe! and Secrets of the Green World.

To learn more about these unique art and science offerings, please follow the links below:

Secrets of the Green World July 25-29

2016 High School Portfolio Day in the May 18 Valley News Thanks to Keene State College, Montserrat College of the Arts, Lesley University, and Columbia College of Chicago for sharing your knowledge with aspiring Upper Valley artists!