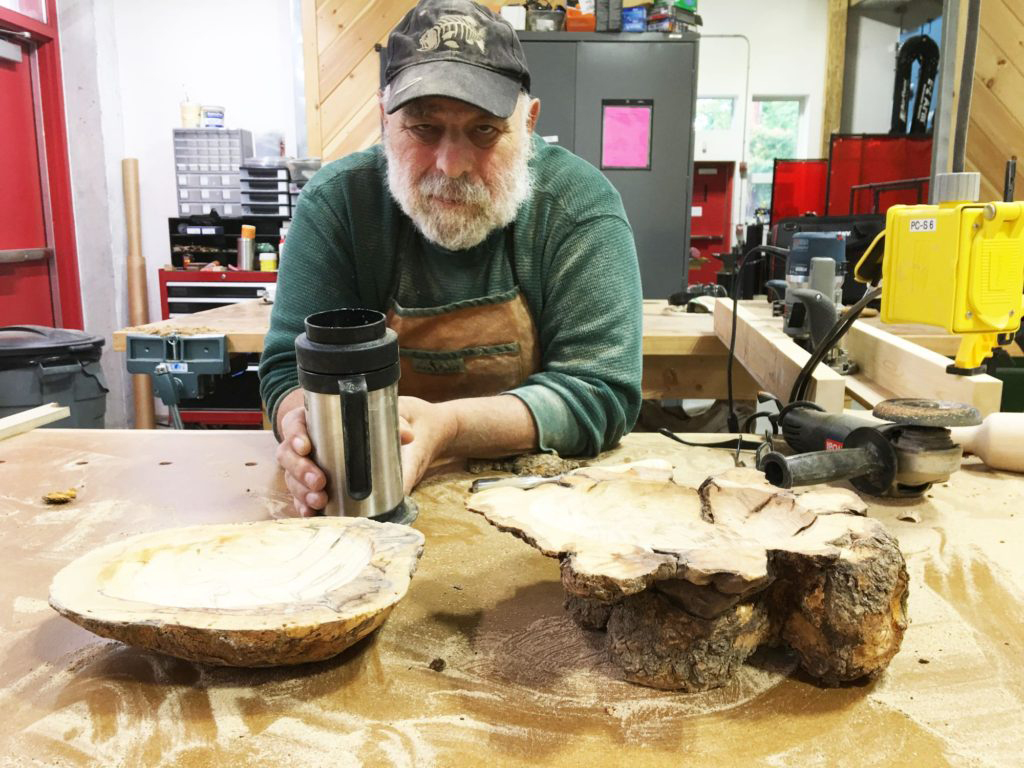 Jay Singh’s journey to becoming a fine woodworker is undoubtedly a metaphysical one, with its fair share of transcendent turns of luck, and it begins in the 1960s in Kent, Ohio, where he owned and ran, quite literally, a metaphysical bookshop.

On May 4, 1970, when National Guardsmen opened fire on Kent State student protesters, Singh was out of town. Though when he was finally able to return home, driving slowly up Main Street toward his shop, he recalls his strange fortune: “Every store window was broken, except for mine.”

The university closed soon after, and so, as a result, did his bookshop. But he’d already begun tinkering in metals with Ohio friends who were silversmiths. So when he packed up and moved to Vermont to join a spiritual community, later heading off to build a log cabin in the woods of Maine, Singh was certainly “crafty and artsy,” he says, but was yet to fully discover why.

Eventually meandering to Santa Fe, New Mexico, he found himself at the checkout counter of a lumber store reading a brochure for the woodworking program at the local community college. “And I was like, whoa, I want to do that.”

But the nature of the universe made him wait. He took the brochure home and filed it away somewhere. “One morning, about a month later,” he says, “I woke up and suddenly had one really strong thought: I need to find that brochure.”

Lucky he found it, because the woodworking program’s open house was the very next day. He went and was immediately hooked, going on to earn a degree and then becoming an instructor at the college.

Singh’s formal training emphasized precision, especially in furniture making, but his inclinations were always less linear. “I started taking classes in the art department and experimented with design that was more creative,” he says.

Going from fine furniture to free-form wood sculpture, Singh still draws on the formal training. “My sculpture tends to be really tight, but there’s a freedom there.”

There’s metaphysics in that freedom, too. An effortless, meditative, even childlike sense of presence envelopes his time in the workshop, which accounts for Singh’s very simple reminder to himself: “The adult Jay never enters the studio.”

After more than a decade in Santa Fe, where Singh carved out a successful period of producing and selling his sculptures, what convinced him to move to the Upper Valley, he says, were the sources of the most rewarding spiritual experience in his life: his grandchildren. And now, when he isn’t spending time seeing the world through their wide-eyed, unfiltered lens, he’s often in his studio at AVA Gallery.

Starting in January, Singh will offer an introduction to woodworking in AVA’s Bente Building, and it will begin with the fundamentals of fine woodworking, before deepening into concepts of texture and design, shaping and color that students can bring to the pieces they’re creating.

And if he’s being honest, Singh says, “I expect at some point that my students will touch fire in this class.” By that he means that transformative moment when the creative process itself consumes you. “After each class, I want them to think, wow, I can’t wait to get back in here.”

Students will gain both the technical knowledge that goes into woodworking as well as, Singh hopes, “a pointing in the direction toward that source inside you,” which can transform a hunk of wood into something useful, beautiful, and possibly out of this world.

Sign up here for Jay Singh’s class, Wood Sculpture I, and explore other woodworking offerings at AVA this winter.