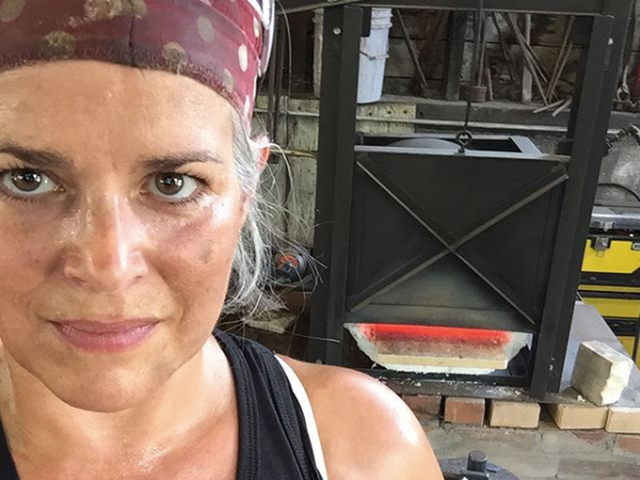 Sabrina Fadial, blacksmith artist and one of the newest metalworking instructors in AVA’s Bente Building, found her way to the craft by mistake.

“It’s a lesson for why you should always leave yourself open to new possibilities,” she says.

Living in North Carolina in 1997 and wanting to expand her creative skill set, she had signed up to take a glass-blowing workshop. “But a week before the class started, they called to say they’d overbooked it and asked if I’d be interested in a blacksmithing class instead. I said ‘sure!’ And it was life-changing.”

Fadial soon sought out more metalworking workshops, set up a studio near her home, quit her job at the high school, and focused full-time on producing and selling her work. In 1999, she decided to deepen her knowledge even further and enrolled in the MFA program at Vermont College of Fine Arts (VCFA) in Montpelier.

Her journey led her next to Oakland, CA, for about a decade, before she was drawn back to VCFA as the new assistant director of the visual arts program, then later as director of alumni relations. The work was meaningful but eventually kept her from creating. “I needed to start making things again,” she says, “because I’m a miserable person if I’m not making. I knew I needed to carve out space and time for it, to work with intent.”

In 2017, to mark 20 years as a blacksmith, Fadial opened her own studio, which adjoins her home now in South Barre, VT.  Stevens Branch Studio, she says, is “a creative incubation space” that offers classes, mentoring, and short-term artist and writer residencies. Some programs are specifically designed “to empower women and girls through textiles and metal arts.”

She believes it’s the perfect medium through which to express feminine strength as beauty. “Beauty has become so marginalized and commodified in this world,” says Fadial. “By documenting endangered beauty—in nature, in women—we can reclaim and rescue it from those margins.”

And she brings to AVA that firm belief that bending steel is for women as well as anyone. To the newcomer who’s unsure about embarking on a medium that involves extreme heat, large equipment, and heavy materials: be patient. “The hardest thing is learning to be comfortable wearing welding gear and how to move around in it.”

As for developing one’s welding skills, it’s akin to learning a new language and appreciating how uniquely you can express yourself that way. “I can say things with steel that I can’t say with cotton or with words,” Fadial says. “The more languages you know—in art, in anything—the better you can communicate whatever you’re trying to say.”

Read more about Sabrina Fadial and her work here.

Sign up for Sabrina’s “Steeling Nature” workshop or explore all metalworking classes offered at AVA this fall!